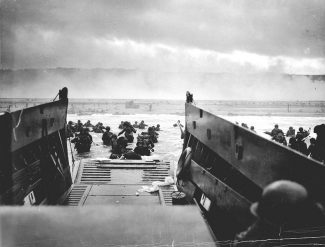 The greatest amphibious invasion the world had ever known.

During the first half of 1944, most of southern England, including Tilbury and Chadwell was a military restricted area. As D-Day came closer, the area was packed with military personnel and vehicals waiting for the launch of the invasion of France – map from 1944.

Tilbury also played a part in two other projects essential to the success of the Normandy campaign – PLUTO and Mulberry.

PLUTO (Pipe Line Under The Ocean) was the installation of a cross channel pipe line to supply petrol for the invasion forces. Six large drums, each with 70 miles of pipeline were put together at Tilbury before being deployed.

Mulberry was the code name for pre-fabricated harbours that could be used to resupply the food and ammunition needed in France. They were assembled at Tilbury dry dock (and at Southampton) before being towed across the channel.