Restored and returned to its original position 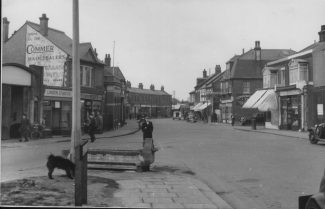 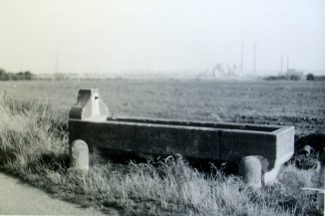 zoom
The trough at Biggin Lane in 1967
Thurrock Museum 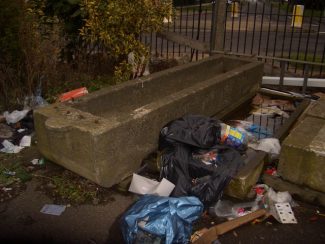 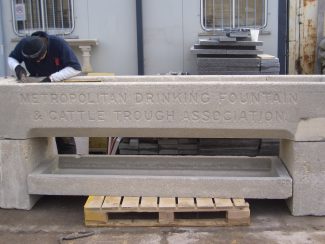 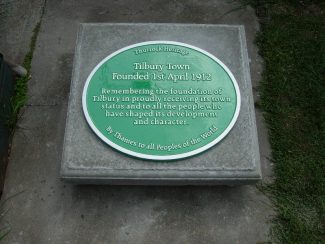 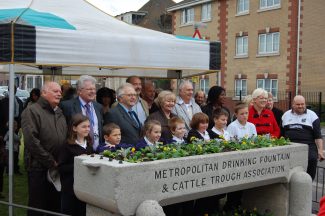 zoom
The then mayor and other dignitaries
John Matthews 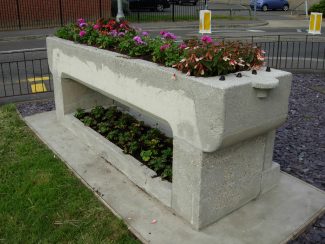 When working horses were being used for deliveries and transport, horse troughs were a common sight. Many survived the second world war, but they gradually disappeared during the ’50s and ’60s.

This trough was originally at the junction of Dock Road and Calcutta Road – known locally as the Bullnose. It was installed in 1916. It was apparently quite a landmark, if someone died in the docks, flowers were laid next to the horse trough. It appears to be the only horse trough to survive in Thurrock.

In the 1960s, when the junction was widened, it was moved to Biggin Lane for a while. During the time at Biggin Lane, it was damaged, and its condition deteriorated – see the picture in the gallery. It was subsequently moved to a field near the power station.

It was rescued by Peter Hewitt of the Tilbury Riverside Project. After being rescued, it was stored in the CRC car park. Historical research by Jack Doodes a resident of the town and member of the Tilbury Community Forum helped to ensure its restoration, cleaning and presentation back to public view thanks to funds raised by the community forum with help, grants and encouragement from Lyn Gittins, Brian Benson, Nick Falconer and Jonathan Catton.

It has been restored by Madstone of Tilbury but, it was not possible to re-introduce water to the trough so it now serves as a container for flowers. In March 2010, it was re-positioned, close to its original location. The flower display in the trough is looked after by Nick Falconer on an annual contract paid for by the Tilbury Community Forum. The children of the Lansdowne Primary School Gardening Club look after the raised flower bed behind the trough and St Mary’s school looks after the banana shaped bed.

In September 2010, the then Mayor of Thurrock, Ann Cheale, officially marked the return of the trough. She also unveiled the green heritage plaque celebrating the establishment of Tilbury as an urban district in 1912. The ceremony was attended by local MP Jackie Doyle-Price, councillors, residents and children from a nearby schools.

By Jack Doodes and John Matthews