A different way of Schooling 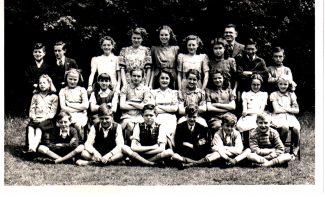 It’s gone now; it stood at the rear of the Junior School in Rectory Road Grays, approached via a long gravel drive, and built on a sloping site, a former gravel pit.  The whole School was timber framed and clad, hardly a brick in sight.  The main building housed the kitchens, nurse’s treatment room, showers, the cloakrooms, the Head Mistress’s study, and the assembly hall.  The hall had floor to ceiling windows that folded back, thereby living up to its title of Open Air School, as did the two class rooms, these were linked to the hall by covered walk ways.  Two asphalt playgrounds, upper and lower, each with outside lavatories, lots of grass, and all surrounded by tall trees.

I joined in 1940, and in a world about to go mad, this would be my haven of peace here I would be safe.

This change of school separated me from my brothers; as it was over a mile away, as the crow flies, and gave mum the burden of taking me, and collecting me at the end of the day.   After all I was only five, and a ‘little B’. So I was walking over ten miles a week, and Mum was doing twenty. Bus rides were out of the question, for both of us it would have cost half-a-crown a week, (12.5p).  However Miss William’s the headmistress, eased the burden, and instructed Mr. Wakefield the School Caretaker to open the bottom gate each morning, and evening, thereby cutting Mum’s walk by five miles a week.  Later I was trusted to travel by bus, and the walk to the bus stop down Rectory Road took us past a sweet shop run by two sisters.   There you could get a glass of fruit drinks, for one-penny, and in the winter, could get it warm for an extra halfpenny.

Tuberculosis, Rheumatic Fever, Poliomyelitis, Bronchitis, and Rickets had been around for many years, as the world waited for Alexander Fleming to discover Penicillin.  Meanwhile Open Air Schools were set up to care for the child victims of these scourges, and to give them as good an education as their counterparts in local schools.

In some respects it was better, for the classes were small, and the teachers could, and did give you the individual attention that was so badly needed, particularly as some had spent time in sanatoriums, and needed the individual attention that only this type of school could give, to enable them to catch up with the rest.  The Open Air School was a different world, on arrival each morning, we would change our boots, or shoes for rubber soled slippers, yes we did have morning assembly with hymns and prayers, but we got a warm drink and some thing to eat before hand.

After dinner, a meal which was all fresh cooked on site, we went to the washroom, were we cleaned our teeth, the toothpaste being doled out by nurse Hayes.   Then we went for an afternoon nap on canvas trestle beds, in the summer this was held on the field under the shade of the poplar trees, with Nurse Hayes keeping watch for enemy aircraft.

The school day ended with a final assembly, with more hymns and prayers.  Miss Williams coached, the upper class, in hymn singing.  She said it was important that we should learn new hymns, and sing them well, so that the younger children would learn through them that there was a power greater than any on earth who would see us through come what may.

We sang ‘O’ God our help in ages past’ and ‘For those in peril on the sea’ and ‘Now thank we all our God’ and many others which in later life would become old favourites.  These singing lessons, would later lead me to joining my brother’s in Chadwell-St-Mary’s Parish Church choir, had we got religion?  No it was just a ‘nice little earner’ sixpence on Sunday, three pence rehearsals, and a whole shilling for weddings.

It was Miss Williams who encouraged me in reading, she would read to our class from classics like ‘Rob Roy’ ‘Master of Ballantray’ ‘kidnapped’ ‘Treasure Island’ ‘A tale of two Cities’ and many more.

One of the highlights of our school life was, Doctor’s Day held twice a year. Those selected for examination would change into PT kit, and be weighed and measured by Nurse Hayes, and then taken into be seen by Dr Brown.  He would sound your chest, and ask you to put out your tongue, sometimes your mother would be in attendance.  Those deemed in need of building up, would be prescribed ‘Parrish’s Food’ an iron tonic that turned your lips mauve.  One thing he could never cure was my chilblains, a ailment caused by the cold damp winters , these sores broke out on your fingers and toes, they itched like mad, but if you scratched them they would bleed.

Miss Williams had a friend in Canada, a Mrs Gray, who sent us a sack of rice under a Commonwealth ‘Send-A-Parcel’ scheme.

And to further supplement our diet, the school had it’s own market garden, which we boy’s tended under the supervision of Mr Wakefield the school caretaker.