You are here: HomenextPeoplenextMemories Of Growing Up In Tilbury

Memories Of Growing Up In Tilbury 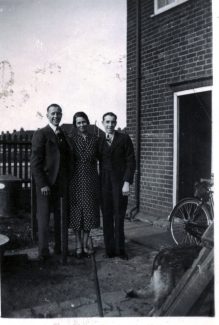 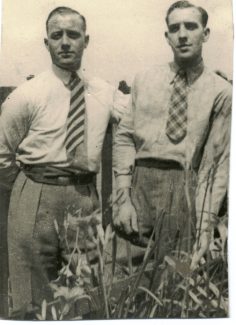 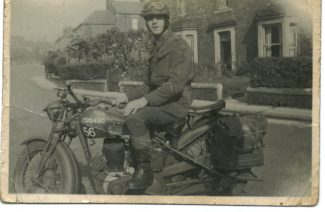 I was born in1918 in St Chad’s road Tilbury, my grandparent’s house. My father was a stoker on the Orient Line ships that sailed from Tilbury to Australia.  I only have a few memories of my father, as when I was about 5 years old he sailed away and jumped shipped when he reached Australia.  We never heard from him again, so we stayed at my grandparent’s house with my mother and younger brother.

My mother had to work to provide for us and go to the Relieving office to get an allowance of 10 shillings and a pair of boots each.

My mother worked as a waitress in Brettels Restaurant starting early until 6pm for 12 shillings a week. Mrs Brettel also gave her some unsold food to take home which was a great help.

My gran looked after us well and we were happy, and although not well off, my childhood memories are good.

I went to St Chads school (built in 1923), with my brother. We had no excuse for being late as our house was only 200yards from our house. The headmaster was Mr Pitt who had only one arm, (he lost an arm in the 1914/18 war). Other teachers I remember were Mr Tampkins, Miss Hookaday, Miss Birch and Mr Wilson.

After school hours were always full of activity with several local boys, Alfie Legg, Ron Wilson and my brother Len. I can recall going to Holtons woodyard in Dock road to get bamboo poles for a few pence. These came from the holds of ships called dunnage. It was used in holds to store cargo.

The poles were strong and gave us great pleasure jumping ditches up the Manor Way behind the school. This could be quite a challenge to us all, and we all got a few ‘wettings ‘by not clearing the ditch. We also spent endless time ‘tiddler’ catching. We caught stickle backs and newts in jam jars.

Saturday mornings was spent at the cinema. The ‘tuppenny rush’ at the pictures always seemed to be cowboy films. This caused alot of cheering & booing and stamping of feet! We always used to eat sweets, and I remember a ‘Tommy Tucker’ bag which contained broken wafers, coconut shreds , but in the dark I got what I was to find out to be red chilli ( of course it should not have been in bag). I chewed on it and the result was terrible, my mouth was on fire, I ran out along the road to the horse trough that stood on the corner, and used the drinking tap with the metal cup on a chain. Alas the man on the door would not me back in the cinema. After seeing the film, we always went home and enacted the cowboy scenes.

We also got old bike frames with pram wheels replacing cycle wheels, another thing was a trolley-box on a plank of wood, two wheels at the front controlled by rope at the back with a box for the driver.

As we got a bit older, cigarette cards became a hobby and we would go to the bridges leading to the docks and if there was a ship in we were lucky to get some crew to give us some cards.

At school I did ok, and I liked carpentry the best. Several boys did well and went on to Palmers college or the Intermediate (green coats). When I was 13 my mother spoke to a customer in the restaurant about getting me a job. The customer was a man called Mr Box who worked in the Mercantile outfitters inside the Docks namely J Blake and Co. It was arranged that I could go to the shop every evening and Saturday mornings to tidy up to the shop and sweep around outside. I left school and became a delivery boy. This entailed taking parcels aboard ships as they came in. The business of the shop was to supply new crews with the uniforms they needed i.e. waiters, chefs, bell boys and officers. The shop also supplied a stock of clothes to be sold at sea. It was my job to collect the stock when the ships returned 3 months later.  I looked forward to this as the store also had food stocks and I was given apples, pears, biscuits etc.  I loved going on board when the ship was sailing, the place was bustling. Tilbury station was so busy with passengers, luggage and porters who took luggage on hand trolleys.

I had a uniform to wear for my job, peaked cap, navy blue tunic with silver buttons- very smart, but I hated my mates seeing me in it!

It was a very interesting job as there was so much activity.  I remember seeing the English cricket team going away on an Orient Line to Australia or India. I also saw the Royal Scot train being loaded on the ‘Beaver brae’ ship on its voyage to Canada to haul the Royal Train for the King & Queens visit.

I stayed at this job until I hoped to get a rise but was told I had to pay stamps so with no prospects I left. My mother was not pleased!   It is now 1934 and not a lot of work around so I had to go to Grays to see the employment officer, Mr Tucker. He told me that there were jobs at East Tilbury where a shoe factory had started up a year before. As I had been working in a shop Mr Tucker decided I would be happy to do similar work. This was not to my liking so I tore up the slip and went to try for myself.  I was given a form to fill and then told to wait, after 2 or 3 hours I was told to report to the boiler house. This did worry me – thoughts of shovelling coal was in my mind, but to my surprise and delight it turned out to be where the electricians shop was situated and I was put to work with a young Scotch lad from Dundee called Jimmy Petric.

I really did like this job because the Bata shoe factory was growing fast, and I was learning new skills. In 1938 I was put to work with a Siemens Telephone engineer from Czechoslovakia to install the first automatic phone system all around the factory.  It was arranged that I should go to Czechoslovakia on a course to maintain the exchange. I looked forward to this but alas Mr Hitler was ‘flexing his muscles’ and a crisis was imminent.

On 20th June 1939, now being 21, I was called to the ‘militia ‘to train for 6 months, and had to report to Warley Barracks (now Ford Motor company offices).  100 men reported that Saturday morning. I opted for the signal section and was given the chance to be a despatch rider. This was the beginning of 6 years and 7 months of my army life!