You are here: HomenextPeoplenextSportsnextCycle Speedway 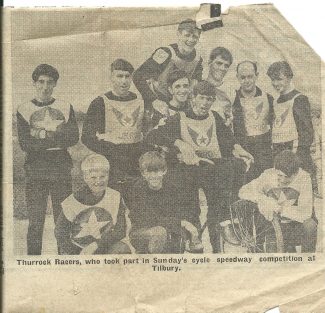 I have just come across an article about Jack Richards and Cycle Speedway and well remember the late 40’s and early 50’s with Tilbury Hammers and later Thurrock Cycle Speedway which started in 1957 on Charringtons Fields, St Chads Road and moved in 1968 to Blackshots.

I took over control of the club in 1961 and was responsible for it becoming the biggest and best in the Sport. Just to give a few names to go with Jack Richards:-  Bill and Steve Byford, Bert (Bluey” Waterson, Alan Bass, Gerald and Lionel Spooner, Dereck Gray, Garwood ,Alan Wood

these were some of the lads that rode in Old Manor Road track  near the British Rail Loco sheds and the allotments. There were also teams in Grays, Aveley and the Homesteads at Stanford Le Hope in those days.  The track in Tilbury in the late 40’s attracted big crowds and there was a lot of local support. Bert Waterson went on to ride for Longbridge Leopards in Barking Park when the club finished in Tilbury but returned to start up a new club as Thurrock in 1957 in St Chads Road on the site of the recently demolished St Chads School .  I spent the first 50 years of my life in Thurrock and have a good memory of everything Tilbury at the end of the war.

I spent a lot of time with Bert Waterson and well remember his wife Rose and his children when they were small. It was Bert that got me involved in the sport and I went on to the become the most powerful person  in the sport and spent nearly 40 years as an administrator at National Level . I am currently the secretary to the Veteran Cycle Speedway Riders Association.

One of many photos from the Tilbury track taken middle 60’s:-

Back row left to right:-