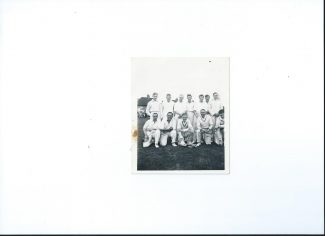 This is, I think, a photo of the Tilbury Cricket Club taken at the Daisy Field sometime in the late 1950s or early 1960s. My father (Peter Johnson) who was a regular local cricketer who played for Tilbury, Orsett and Shell Mex & BP team, is second from left in the front row. The only other name I recall is that of Ernie Scorer who is second from right in the front row. We lived in Gainsborough Avenue with a garden which backed onto the Daisy Field which meant that I spent most of my childhood playing football, cricket and tennis there.

I distinctly remember the opening of the new pavilion which must have been in the early 1960s and my friends and I were always keen to play football once the team games had finished so that we could have the rare opportunity to use the goal nets until they were taken down!