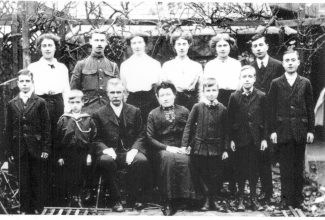 This photo was probably taken in Orient Road or Southey Walk, Tilbury. Orient Road was between the Dwellings and Tilbury Hospital and ran parallel with Peninsular Road. The cottages in these two roads were owned by the PLA. Albert George Turnnidge was a PLA lock keeper.

Albert John Turnnidge (in uniform in the photo) served in the Royal Field Artillery in the 1st World War. He was a Battery Quartermaster Sergeant. Photos such as this one were often taken during the final leave before the serviceman was sent overseas.

William Richard Turnnidge was a gunner in the Royal Artillery during the 2nd World War. He is commemorated on the Alamein Memorial in Egypt.