The day the school burned 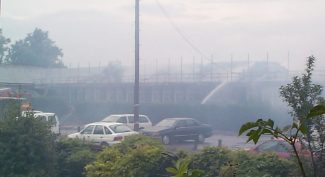 In September, 2000, after some rebuilding work was nearly completed, a major fire started in the roof of the Chadwell St Mary primary school. It burned for several hours and nearly destroyed the building.

Riverview was blocked for much of the day while the fire brigade dealt with the fire. Fortunately, the school was closed at the time and no one was injured.