You are here: HomenextPlacesnextPalace Cinema 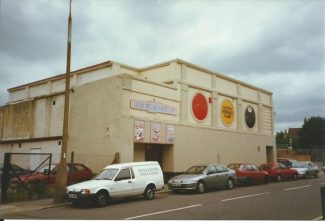 The Palace Cinema (Bug Hutch) was originally The Tilbury Alhambra and Cinema Hall. It opened in 1914 as a variety theatre and cinema. It had an 11 feet deep stage and two dressing rooms.  Admission at its opening ranged from 2d  to 1 shilling. (approximately 1p – 5p)

The Palace Cinema closed in 1959 and became a snooker club and bingo club.

My father Bill Cowin worked as a projectionist for a short while in the early 1950’s. At the same time there was another projectionist called Fred Sharp. I think Joe Hanks was the owner.

I have vague recollections of going into the projection box when I was maybe 5 or 6 years old. I seem to remember two large cine projectors and a third still projector which I think they used to put messages on the screen.