You are here: HomenextTransportnextDocksnextDockers Strike 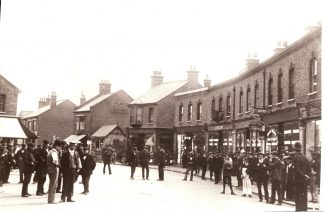 zoom
I think this is a picture of a dock strike. Picture supplied by George Ridges 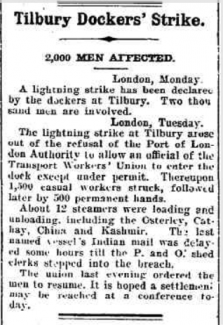 Tilbury Dockers’ Strike. 2,000 MEN AFFECTED. London, Monday, A lightning strike has been declared by the dockers at Tilbury. Two thousand men are involved. London, Tuesday. The lightning strike at Tilbury arose out of the refusal of the Port of London Authority to allow an official of the Transport Workers’ Union to enter the dock except under permit. Thereupon 1,500 casual workers struck, followed later by 500 permanent hands. About 12 steamers were loading and unloading, including the Osterley, Cathay, China, and Kashmir. The last named vessel’s Indian mail was delayed some hours till the P. and O.’ shed clerks stepped into the breach. The union last evening ordered the men to resume. It is hoped a settlement may be reached at a conference today.