You are here: HomenextTransportnextDocksnextDocking of the Jervis Bay

Docking of the Jervis Bay

Plus song Rolling Down The River by Jack Forbes 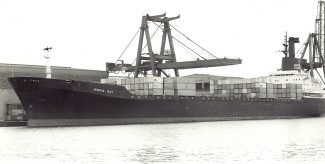 In the early 1980s the Essex-based broadcaster and journalist Dennis Rookard produced a series of radio programmes to be broadcast on hospital radio.

An interesting extract from one of these programmes called Wind Over Tilbury can be heard by going to the Essex Record Office Blog. The container ship Jervis Bay is being lined up to enter a lock. There are also some interesting pictures of Tilbury Riverside Station and Docks http://www.essexrecordofficeblog.co.uk/tag/tilbury/

In Wind Over Tilbury the South-Essex musician and songwriter Jack Forbes composed a song specifically related to the subject in hand called Rolling Down The River.

You can hear the full song here on youtube https://www.youtube.com/embed/xbRGnGtj-EQ

Here are the words to the song:-

I once was a rigger & I worked like hell
Rolling up, rolling down
But now I’m working with the OCL
And go rolling down the river

Rolling up, rolling down,
We’ll all get drunk in Tilbury Town
In twenty four hours we’ll turn around
And go rolling down the river

There’s a Tilbury girl called Kettle Jane,
First on the boil then off again,

But at the dockyard gates when the work is done
You can pick ’em up boys, one by one

© Jack Forbes wrote and recorded the song ‘Rolling down the River’ in 1982 for a radio programme about Tilbury Docks. It has since been used in an educational Drama production, a Folk Theatre presentation and also as a Morris Dance, as well as being sung all over the world.

It can be heard wherever there are shanty sessions at folk festivals and festivals of the sea. There is an American version and a Polish version (sung of course in Polish).