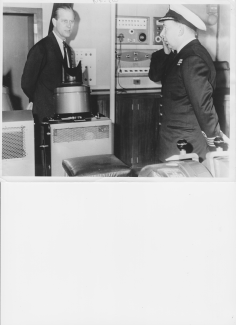 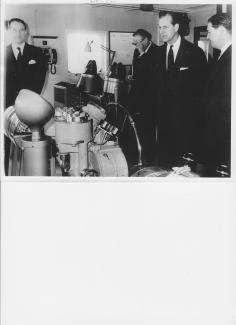 My Dad was a Traffic Superintendent with Atlantic Steam Navigation, who ran the Transport Ferry Service from No. 4 Berth.  He was in charge of the accounts department. They moved to 35/37 Berth when the new Dock Extension was built.  After we emigrated a to Canada and he and Mum moved back (and I stayed here), he worked for CP Ships in the Docks.

These two photos were taken during the visit of HRH Prince Philip sometime around 1964. I believe the Captain showing him around is Captain Cowie.  The others are probably part of his security detail.

The company started with LSTs (Landing Ship Tanks) that they bought from the MoD after WW2.  (Empire Baltic, Empire Nordic etc) and they ran from Tilbury to Rotterdam and Antwerp, sometimes Hamburg.  We used to get a free trip every year.

The ships had a rear door ramp for loading, and were the fore-runner of the ro-ro service that was later bought by P&O and Townsend-Thoreson.