You are here: HomenextTransportnextDocksnextTilbury Dock 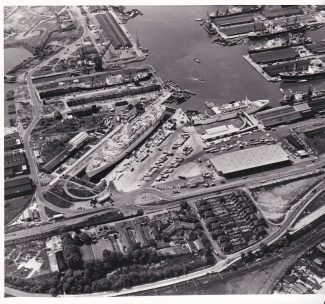 I am guessing at the date around 1968/69 as the Dwellings have all gone, the hospital still there, just. The Swedish Lloyd vessel ‘Saga’ on the RoRo berth, with ( heres one for all you budding detectives, ) a large P&O liner in the dry dock. Checking the P&O ships website I can safely rule out Oronsay and Orcades.. in fact it narrows down to either Chusan, Arcadia or Iberia. With an outside chance of it being Himalaya. I had trouble counting the lifeboats!

(This is a second attempt at submitting the photo of Tilbury Dock form around 68/69..I have scanned it horizontally instead of having it come out at an angle.)