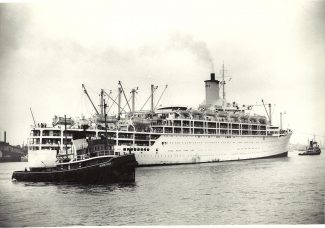 “Rescue Ship docks at Tilbury”- The 28,396 ton liner Orcades was seen docked at Tilbury after it had saved a 17 year old sea-man who had fallen into the sea during the night. The alarm was raised and the ship turned back and followed its previous course to search for the young seaman. He was eventually spotted by one of the ship’s searchlights and immediately rescued.

This article was provided by Jonathan Catton and the Enquirer newspaper’s What happened this week feature.

Thank you to Jonathan Catton and the Enquirer.