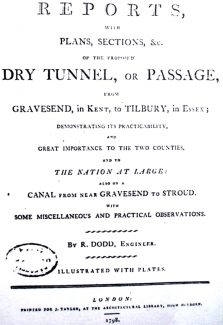 zoom
Advertisment for the scheme 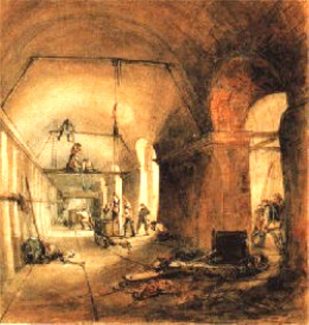 zoom
An imaginary view of the tunnel

In 1798 a tunnel was proposed by engineer Ralph Dodd, linking Gravesend to Tilbury Fort under the river Thames. This was intended to move troops from Gravesend barracks across the river more quickly to their destination. The tunnel was thought to have started 800 yards to the east of Tilbury Fort.

It was proposed to be a construction with key stones for extra strength. The diameter was planned to be 16 foot, to allow for foot, horse, and carriage transportation.

It also was planned to be illuminated with lamps, and had its own steam engine driving a pump, to remove drainage water. It had problems from the beginning and had continual flooding; eventually the whole project was abandoned, and was a disaster, at a cost of £15,000.