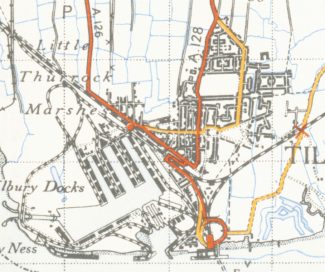 Tilbury’s first railway station was opened in 1854. It was originally called Tilbury Fort, but this was soon shortened simply to Tilbury. In 1936 the name was changed again to Tilbury Riverside.

It sat at the southern end of a triangular junction of railway lines. Trains could bypass the Riverside station, but if it was used, trains would go in forwards and leave backwards.

The station closed in 1992. Although the tracks have gone, the booking hall remains and currently possible future uses of the building are being considered.