You are here: HomenextPlacesnextTilbury FortnextDan and Peter Snow at Tilbury Fort 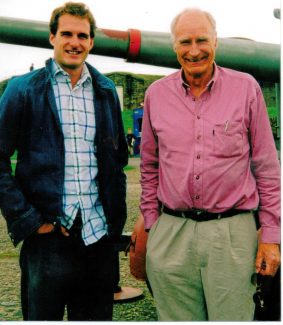 In 2004, Peter and Dan Snow visited Tilbury Fort as a part of a promotional tour and book signing for their TV tie-in book – Battlefield Britain.

I have the body of a weak and feeble woman, but I have the heart and stomach of a king, and a king of England too

The series included an episode covering the Spanish Armada. Queen Elizabeth I came ashore near Tilbury Fort on route to deliver her famous speech.

The series also featured the Battle of Culloden which saw the defeat of the Jacobites. Many of them were subsequently imprisoned in Tilbury Fort. There is a list of these prisoners and what happened to them inside the Fort.