You are here: HomenextPeoplenextSportsnextAustralian touring side, 1948 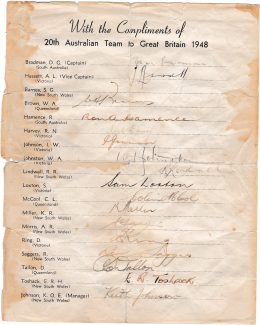 zoom
The autographs of the 1948 Australian touring team

This autograph collection was brought to us by Fred Morgan. It was collected by his dad, Victor Morgan, known as Taffy.

The 1948 touring Australian cricket team arrived at Tilbury on 16th April, 1948 on the Strathaird. They went on to play 34 games and remained unbeaten throughout the tour.

It was Bradman’s last test series before retiring. In his final innings, he needed only four runs to have a lifetime test average of 100. He was bowled for a duck.