zoom
The Magdeburg being raised in 1965 (but Ian Boyd and David Stableford have both suggested that this picture is actually the Isabel-Flores).
Cliff Cowin

zoom
The buses still visible on the deck 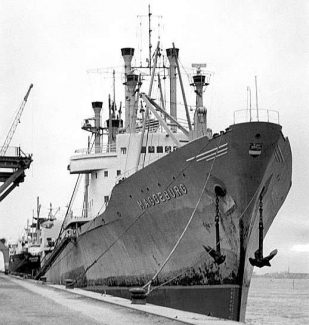 In 1964 the East German cargo ship M.V. Magdeburg was in collision with the Japanese ship Yamashiro Maru in the Thames near Tilbury.

The Magdeburg was carrying 42 British Leyland Buses bound for Havana, Cuba. Mystery surrounds the sinking with links to the C.I.A. as the USA had a trade embargo with Cuba.

I took this picture of the salvage operation in 1965 as the ship was being raised.

It was taken from Gravesend and you can faintly see in the background Tilbury Fort and the Power Station.

On the 27th October 1964, in the biggest collision of the time since World War Two, the East German cargo vessel the M.V. Magdeburg was involved in a collision with Japanese vessel the Yamashiro Maru near the Grays side of the River Thames.

The Magdeburg was steaming down the river from Dagenham with a cargo including 42 British Leyland buses bound for Havana, Cuba.  The Yamashiro Maru was heading up-stream for the Royal Docks, when just off Broadness Point the vessels collided, the bows of the Japanese ship hitting the Magdeburg’s starboard side near the wheelhouse.  The Magdeburg was badly holed and heeled over to one side and eventually it beached just off Broadness Point.  On board the East German vessel there was a total of 54 crew including three stewardesses and also two passengers.

During the collision one man was thrown into the river, but was picked up safely, and just two other persons were injured.  Those on board used rope ladders to climb over the side to escape before the ship heeled right over, and were picked up by the tugs Hibernia and Dhula.  The crew had a very lucky escape, the purser, Lothar Prause said “There were eight men on watch at the time, the rest were asleep.  We were awakened by a terrific crash.

We began to heel over and some of the cabins began to flood.  The whole vessel was evacuated in 20 minutes.”  Also Captain Frank Cable of the Hibernia had commented, “All the time the ship was moving further on to its side.”  The Port Of London Authority stated that the collision in the Thames was the worst since World War Two and would be one of the most difficult wreck to move and salvage that they have encountered.

The salvaging of the Magdeburg vessel (built in 1958 and weighed about 9,656 tonnes) was a complicated operation, after an unsuccessful attempt to upright the vessel failed in March 1965.

Second attempts were carried out in July to finally upright and salvage the vessel. Every effort was made to ensure that this time the operation would be a success.  The Port Of London’s Authorities Salvage Officer and his staff took part in discussions with the salvors and afforded what help was required.  Two floating sheerlegs, a type of floating crane vessel, were used to help lift the vessel upright.  Using four booms connected to the vessel, a series of wires were taken right under the sunken ship, round her keel to the opposite side of the hull where they were firmly fastened to one side of the vessel. The second attempt to up-right the Magdeburg took place on the 7th July.  The lift commenced at low water and by high water the vessel had been righted to the extent of a 40-degree list compared to the 87½-degree list when she sank.  From high water the ship was eventually righted to a 20-degree starboard list, the maximum righting possible because of the angle of the riverbed at this point.

Ever since 1960, the U.S. Government had been putting an economic squeeze on Communist Cuba with what amounts to an unofficial trade embargo.  Free world nations are urged not to do business with the Cuban President Fidel Castro, and all vessels dealing in Cuban trade were blacklisted from picking up U.S. Government financed cargo, leaving Castro almost totally dependent on his Iron Curtain friends.  But in 1964, Great Britain knocked a hole in the embargo big enough to drive a bus through.  In January 1964, in Havana, Britain’s Leyland Motor Co Ltd. Signed a deal to sell 400 heavy 45 passenger buses for $10 Million and also $1,100,000 worth of spare parts. The company gave Castro five years to pay, threw in an option for another 1,000 buses and agreed to train whatever mechanics were needed.  To get around the shipping blacklist, Leyland first asked the British government for the loan of an aircraft carrier, when that request was ignored, the company announced that East German freighters would handle the order.  But a British company supplying buses to Castro’s regime annoyed the U.S. government, but there was little that the Americans could do about it.  Cuba needed to replace their existing bus fleet as they’re previously purchased buses from Skoda in Czechoslovakia fell victim to Cuba’s tropical weather, its potholed roads, and also hot-rodding drivers.

Leyland wrote off the 42 buses involved in the incident in the River Thames because of salt- water damage.  During the mid 1970’s, the controversial American newspaper columnist Jack Anderson disclosed that his C.I.A (Central Intelligence Agency) and also the National Security Agency sources had confirmed that the ship collision had been arranged by the C.I.A with the co-operation of British Intelligence.  An officer from the C.I.A had stated that he was sceptical about the collision story, although he admitted “it is true that we were sabotaging the Leyland buses going to Cuba from England, and that was pretty sensitive business”

and Magdeburg from the Kent side

Footnote: The Magdeburg was repaired in Tilbury Docks, and then made it’s first journey out to sea, but mysteriosly sank in the Atlantic Ocean. It is thought that the Captain was ‘got at’ and he scuttled the ship.