You are here: HomenextPeoplenextTilbury Residents 1940s/50s?

Can you help identify some people? 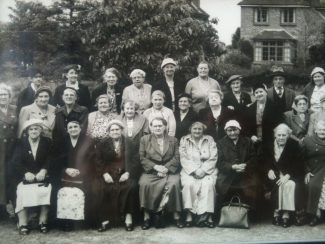 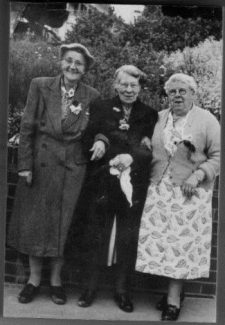 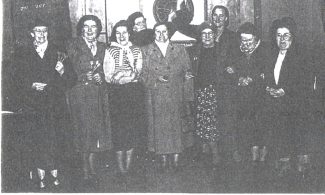 A photo taken at the same spot as the ‘residents of Tilbury Dwellings’ photo above. Obviously a popular spot for group photos at the time.

It includes (3rd from left, front row) my great grandmother Annie Salmon, who lived in Quebec Road and then Northview Avenue until 1961.

Any ideas where or when the picture was taken, or who else is in it?

“Funnily enough this photo seem to tie up with the photo placed by Lea Cornthwaite.

The 2 ladies in rear row left to right 3 & 4 are on my photo.  The one in white is Mrs. Owen, she lived in Central Ave and the middle row 3rd from left is my Nan Mrs. Luck.

“The second picture with the three ladies in it – the one on the right is my nan, Florence Locke who lived in 104 Quebec Road. Probably taken in the 1950s,or 60s. She was a keen darts player at the tute and was in the ladies team. (Can remember the Trophies she won in her glass cabinet.)

Here is a photo of Florence Locke in the tute Ladies Darts team – Third from Right.”

He adds that the group photo it may have been taken behind the old Carnage library in Grays, as they had a garden at the back and have seen pictures with similar surroundings.